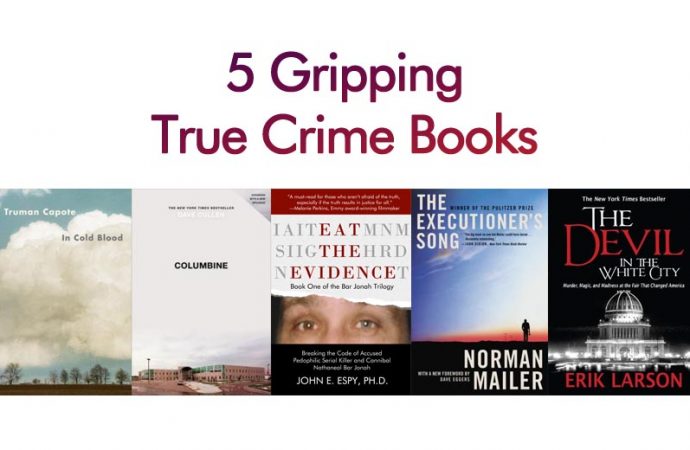 You will not be able to put down these 5 gripping true crime books.

1. In Cold Blood by Truman Capote “On November 15, 1959, in the small town of Holcomb, Kansas, four members of the Clutter family were savagely murdered by blasts from a shotgun held a few inches from their faces. There was no apparent motive for the crime, and there were almost no clues.

“As Truman Capote reconstructs the murder and the investigation that led to the capture, trial, and execution of the killers, he generates both mesmerizing suspense and astonishing empathy. In Cold Blood is a work that transcends its moment, yielding poignant insights into the nature of American violence.” “What really happened April 20, 1999? The horror of Columbine left an indelible stamp on the American psyche, but most of what we “know” is wrong. It wasn’t about jocks, goths, or the Trench Coat Mafia. Dave Cullen was one of the first reporters on scene, and spent ten years on this book — widely recognized as the definitive account. With a keen investigative eye and psychological acumen, Cullen draws on mountains of evidence, insights from the world’s leading forensic psychologists, and the killers’ own words and drawings — several reproduced in a new appendix for the paperback.”

4. The Executioner’s Song by Norman Mailer “Arguably the greatest book from America’s most heroically ambitious writer, THE EXECUTIONER’S SONG follows the short, blighted life of Gary Gilmore who became famous after he robbed two men in 1976 and killed them in cold blood. After being tried and convicted, he immediately insisted on being executed for his crime. To do so, he fought a system that seemed intent on keeping him alive long after it had sentenced him to death. And that fight for the right to die is what made him famous.

“Mailer tells not only Gilmore’s story, but those of the men and women caught in the web of his life and drawn into his procession toward the firing squad. All with implacable authority, steely compassion, and a restraint that evokes the parched landscape and stern theology of Gilmore’s Utah. THE EXECUTIONER’S SONG is a trip down the wrong side of the tracks to the deepest source of American loneliness and violence. It is a towering achievement-impossible to put down, impossible to forget.”

5. The Devil in the White City: Murder, Magic, and Madness at the Fair That Changed America by Erik Larson “Erik Larson—author of #1 bestseller In the Garden of Beasts—intertwines the true tale of the 1893 World’s Fair and the cunning serial killer who used the fair to lure his victims to their death. Combining meticulous research with nail-biting storytelling, Erik Larson has crafted a narrative with all the wonder of newly discovered history and the thrills of the best fiction.”