A Literary Tour Of The Delmar Loop In St. Louis 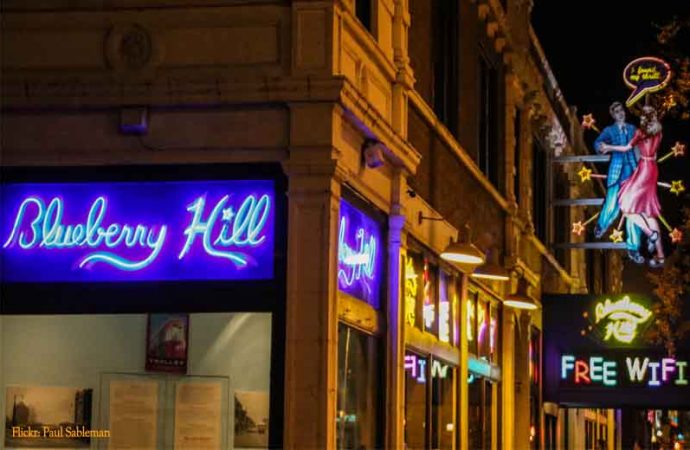 The following passages describing the Delmar Loop in St. Louis, Missouri are taken from The Doubly Dead Angel-Thief by Marc Whelchel, the first book in a mystery series set in the Delmar Loop. The book is available from Amazon and Open Books Direct.

“On the main drag below, the Delmar Loop was coming alive, mocking the death vibes around me. Outside the vinyl shop, the Hare Krishnas in their colorful dhoti were beginning to chant their mantra. T-Bone, an elderly street musician and something of a local legend, was setting up his portable loop machine under the awning outside Kun-Woo’s, preparing to turn himself into a one-man wall of sound. Two pimply-faced teens emerged from the head shop across the street, clutching brown paper bags and looking guilty. A young brunette disappeared into the body paint bar. As unhappy as it made me, life went on.” “The rest of the evening passed in a haze. We drank moonshine with moonshine chasers and then stumbled down Delmar Blvd., past the bronze stars on the St. Louis Walk of Fame, to bars and more bars, where we had the type of deep, dumb conversations about life and love that only drunks can tolerate, and only while they are drinking.”

A lot of my heroes on the St. Louis Walk of Fame. Proud of my hometown. #STL @BlueberryHillMO pic.twitter.com/MBz3YIshZv

“I felt like I needed some air, or something high to jump off, so I stepped onto the balcony. Below me, the functioning world soldiered on. A group of giggling teenage girls were taking pictures with the Chuck Berry statue across the street. Gummy Jack—me in fifty years, I half-kidded myself—stood outside Slice Pizza, jabbering madly in his porkpie hat, looking like a ghost.” “An unexpected storm buried St. Louis under a foot of ice and snow, shutting down schools, businesses, and wills to live. Only the record store in the Loop stayed open. The owner evidently thought that forty-five mph winds and a governor-declared state of emergency weren’t enough to keep hipsters from vinyl.” “The samba music was coming from the common area behind Middle City Farmers Market. Its festive cavaquinhos and tamborims were soon interrupted by a blaring car horn. The driver of a Schlafly beer truck was having words with the driver of a rusty old station wagon. The beer truck wanted to reverse into a loading zone outside Blueberry Hill. The station wagon wanted him to go fuck himself. After much teeth gnashing and a series of middle finger salutes, the station wagon had the brilliant idea to go around the beer truck, and the curtain closed on that drama.” “We watched a Celtic punk band perform Hank Williams covers and then saw the encore of the Los Campesinos! concert at the Pageant, where ‘Romance is Boring’ brought down the house. And then back to Bobby’s, where Lewie switched to beer and I switched to moonshine right out of the bottle. “I barely remember the trek back to my apartment, or running into T-Bone, who was jabbering excitedly, saying, ‘Your friend, V.C., I saw him! I saw the dead man! He was even wearing that same hat as the picture! He went upstairs towards your apartment!’ And I only vaguely recall fumbling with the keys to my door, realizing it wasn’t locked anyway, and then tripping over whatever lay sprawled out on my kitchen floor.

“I don’t remember much about the end of that night, but I do remember there was one question burning in my mind. It stayed with me even as a plainclothes cop barged through the door and threw me to the floor. And it stayed in my mind as he put me in handcuffs and dragged me outside. It was a question that I would ask myself for a very long time.

“The question was this:

“What was the blood-soaked, bullet-riddled body of Jake Kennedy doing on my floor?”