Read An Excerpt From If Ignorance Is Bliss, We Should All Be Ecstatic By Fred Leavitt 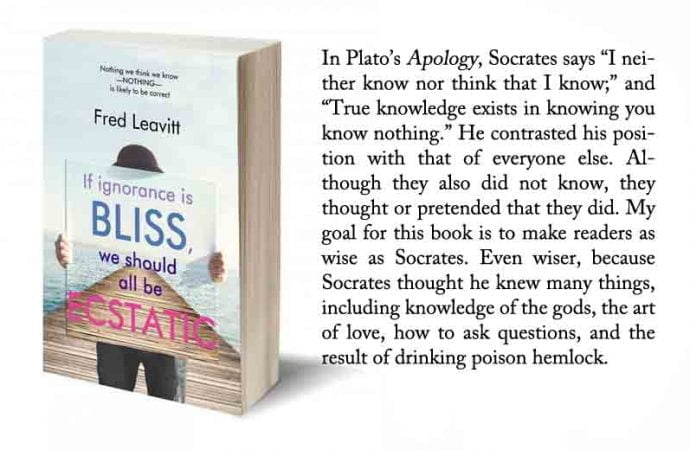 Nothing we think we know – NOTHING – is likely to be correct. If Ignorance is Bliss, We Should All Be Ecstatic by Fred Leavitt explores the limitations of knowledge and argues that neither reasoning nor direct observation can be trusted. Below is an exclusive excerpt from the book.

“An idea that is not dangerous is unworthy of being called an idea at all.”—Elbert Hubbard

Radical skepticism: the philosophical position that knowledge is impossible. Radical skeptics hold that doubt exists as to the veracity of almost every belief.

Around 430 BC, the Oracle at Delphi said that Socrates was the wisest man in Athens. Socrates was not convinced and set out to prove the Oracle wrong. But after questioning many supposedly learned Athenians, he eventually concluded that he indeed was the wisest. In Plato’s Apology, Socrates says “I neither know nor think that I know;” and “True knowledge exists in knowing you know nothing.” He contrasted his position with that of everyone else. Although they also did not know, they thought or pretended that they did. My goal for this book is to make readers as wise as Socrates. Even wiser, because Socrates thought he knew many things, including knowledge of the gods, the art of love, how to ask questions, and the result of drinking poison hemlock.

I trained as a scientist (PhD in psychopharmacology) but soon became disillusioned by drug research. Too many articles in even top-notch journals were either methodologically unsound or fraudulent. So I studied research methodology and, to my dismay, learned that conclusions from other areas of science were also often untrustworthy. Of course, untrustworthy information is not restricted to scientific material. Long before Donald Trump began ranting about “fake news,” I had realized that the media and government spokespeople could not be trusted. Eventually, I came to the depressing conclusion that the amount of information stored in my little brain was probably exceeded by the amount of stored misinformation.

It’s a long way from poor data collection or even outright fraud to the bizarre subject matter of this book. Readers may agree that many alleged facts are inaccurate while questioning the sanity of anyone who jumps from there to the conclusion that nothing can be known. Yet that’s where the trail ineluctably dragged me. For a preview of what follows, consider the following hypothetical experiment. You have developed a new lie detector test. Convinced that it is infallible, you recruit 1,000 people to try to beat it. You give them a series of questions and ask them to tell one or more lies among their answers. Your device detects every lie and never calls a truthful response a lie.

But then comes subject 1,001. Asked a question, he answers “yes” and your device indicates that he’s telling the truth. He’s asked a second question immediately afterwards and says “yes” again. To your great surprise the device again registers truthfulness. The man swears that he really believes what he said. He submits to a psychiatric evaluation and is found free of any major disorder. He is not delusional. You test him again. Same results. Here are the two questions:

Do you anticipate with near certainty the occurrence of thousands of events: the sun will rise, the alarm will ring, food will have a certain taste, and friends and enemies will behave in predictable ways?

Do you agree with the philosophical position called radical skepticism that you can never know anything about the past, present, or future with even the slightest probability that it’s true?

Albert Camus wrote that human beings spend their lives trying to convince themselves that their existence is not absurd. What could be more absurd than belief in radical skepticism? Maybe being certain of two important beliefs that contradict each other.

I am a real-life model for subject 1,001, and my strange and contradictory beliefs make me lonely. I long for company and for resolution. That’s my motivation for writing this book. Read on and you too will join me in facing absurdity. 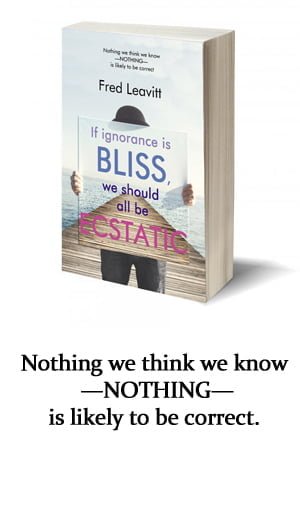