Read An Excerpt From Pot Luck By David L. Gersh 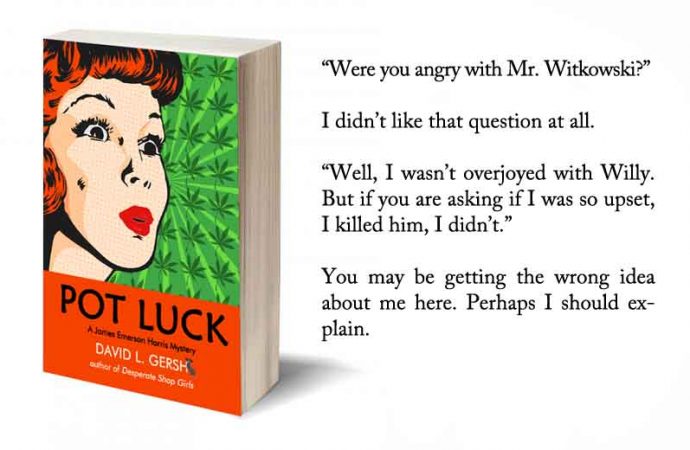 Things always seem to go wrong for Jimmy Harris. He stumbles. He bumbles. He’s arrested for murder. He needs to find a way through this maze. The alternatives are unthinkable. Below is an exclusive excerpt from the new comic mystery, Pot Luck by David L. Gersh.

My pants were stiff at the knees with Willy’s blood. The metallic smell didn’t seem to bother the Sheriff. It sure bothered me.

The sun was settling comfortably into the trees for a long night’s rest. Sheriff S.A Patera and I were sitting in Willy Witkowski’s backyard. The police technicians were packing up their gear.

Heat was starting to flee. A nice deputy found my jacket. I threw it around my shoulders.

Sheriff Patera was a pert woman of about forty-five with black, short hair, licked with gray. She had alert eyes and a lively mouth. She didn’t look like a police officer. Except for her starched brown shirt and her big gun.

She flipped open her notebook. “Mr., um…” she scanned her notes, “Harris.” She paused thoughtfully, then smiled at me showing a lot of white, even teeth.

“I know your name from somewhere, don’t I? Wasn’t there some other murder you were involved in? Chief Carsone mentioned something, but I didn’t quite get it.”

I wouldn’t say involved. No, certainly not involved.

“Ah, yes. I remember it now. It was before I came here. You also discovered that body.”

I nodded, but not happily.

“She was your client?”

Then she pivoted. Thank goodness. I certainly didn’t want to talk about Janet Mason.

“How well did you know Mr. Witkowski?” Her voice was nonchalant, almost indifferent.

“I’ve known Willy… I mean I knew him, for several years. He was a good client.”

“And you discovered both bodies?”

Who’s counting? I know I wasn’t.

“Were you personal friends with Mr. Witkowski?”

“I handled several matters for Willy over a number of years. Which I’m not at liberty to discuss. But I like to think of myself as a friend to all my clients.”

“Mr. Harris, why did you come to see Mr. Witkowski today?”

“I needed to talk to him about some business matters.”

“No, business. We worked together.”

“You worked with Mr. Witkowski?”

“How long have you worked at Wee Willy’s?”

“What kind of business matters did you need to discuss?”

“I needed to talk to Mr. Witkowski about money we needed in the business.”

“I see. How was the business going, Mr. Harris?”

“There were some issues.”

“Did you know about these money issues when you gave up your legal practice to join the company?”

I hesitated. “Not exactly.”

“Were you angry with Mr. Witkowski?”

“Well, I wasn’t overjoyed with Willy. But if you are asking if I was so upset, I killed him, I didn’t.”

You may be getting the wrong idea about me here. Perhaps I should explain. 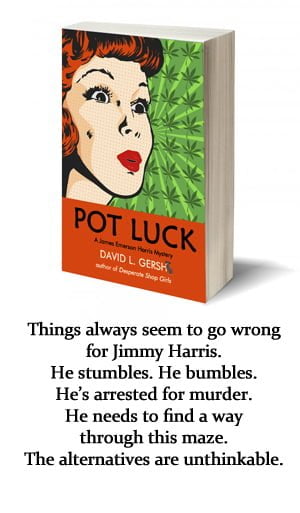